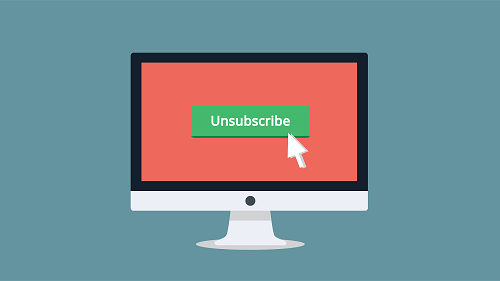 5 Common Reasons Why Users Unsubscribe From Your Email List

Collecting and harvesting email addresses is only half the battle. Unless you retain those subscribers, you won’t be able to effectively market to them. So today we’re going to take a look at some of the most common reasons why users unsubscribe to newsletters.

You Send Too Many Emails

According to data presented by Hubspot, 69% of email recipients unsubscribe because they are sent too many emails. So, how many emails should you send? There’s really no easy answer to this question, as it varies depending on a variety of different factors. With that said, a good rule of thumb to follow is to send no more than two marketing emails per week. This seems to be the happy medium that works well for most niches.

It’s estimated that up to 40% of all unique email clicks derive from mobile devices like smartphones and tablets. Therefore, digital marketers should provide a mobile-friendly email template for their subscribers. If a user attempts to open and read your email on a mobile device, only to encounter broken elements, there’s a good chance that he or she will unsubscribe. To prevent this from happening, make sure your emails are compatible on both desktop and mobile devices.

Your Emails are Being Sent to The Wrong Group

A third possible reason why users are unsubscribing to your emails is because you are sending them to the wrong group. The secret to running a successful email marketing campaign is to split your subscribers up into small, narrow groups, at which point you can then send them customized emails for a higher level of engagement. But if you happen to send the wrong customized email to the wrong group, it may have the opposite effect by encouraging them to unsubscribe instead.

Your Emails are Too Long

Of course, excessively long emails have a tendency trigger unsubscriptions, as well. Most recipients want short, concise, straight-to-the-point emails without all of the unnecessary fluff. Some studies have shown that the average user spends just 15-20 seconds reading an email. If your email are long, consisting of 2,000+ words, it may cause some users to unsubscribe. For this reason, it’s recommended that you keep your emails short, with the call-to-action (CTA) — if applicable — being someone at or near the top.

Last but not least, some users may unsubscribe from your list because the emails aren’t customized. At the bare minimum, you should try to include the recipient’s name in your emails. Using special tokens, you can set up email templates to automatically include the recipient’s name. When a user sees his or her name in the email, they will feel more inclined to read it, which means a greater retention rate. Thankfully, customizing emails is a breeze with software like Infusionsoft.

Did we leave out any other reasons for unsubscribing? Let us know in the comments section below!

Summary
Article Name
5 Common Reasons Why Users Unsubscribe From Your Email List
Description
You work hard to craft well-written emails but if recipients are unsubscribing, it doesn't matter. Here are some tips to help prevent un-subscribes.
Author
John Arnott